Posted on November 16, 2011 by skyraftwanderer

They pulled back. Left to build something. A retreat to the forest and mountains, the genesis of the Sky Raft. The way its light glowed, the settlement appeared to levitate, rising from the ground, into the trees and into the ether as the sun descended.

Centred in the viridian sheath
absorbed in coils of shadowy vines

an arcane pillar of pagodas
slabs of teak stunted and tilted

sinewy gangways spiral out
Catherine wheel of planks and twain

tree houses and thatch huts
one with the centre.

The land closed in, absorbing it. Yet the Sky Raft is out there, some where.

Many bridges dot the rainforest. Only one leads to the Sky Raft. Stretching over a river, lanterns symmetrically aligned come alight, only when struck by the light of a waning gibbous.

The path to the Sky Raft, marked with hollow men of sticks and twain, heads tilted, void stares show the way through the undergrowth.

The angle of the head tilt captures the gibbous light, illuminating forest paths.

The return to nature was admirable. But the jungle neither cared or loved the Sky Raft. It simply forged ahead, oblivious of the consequences. Some lost their sanity, unable to piece together fragments of psyches fractured, left to babble of leaf littered pathways or to run screaming into mist laden mountain peaks.

Others were consumed by disease and the denizens of the jungle, apathetic to the Sky Raft, operating on instinct and nothing more.

A single dwelling. A solitary candle flickers. A hole occupies the roof. Inside a corpse undergoing skeletization is feasted upon by two feathered deinonychus.

The flame keeps on dancing. 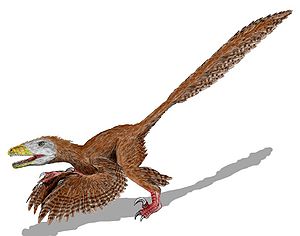 Parts of the Sky Raft have vanished. Strangled by vines and buried under rock fall, huts and houses shivered. Derelict bridges hang over the void, decapitated, leaving tree dwellings broken from the centre, too high to be brought back, now sheathed in gossamer silk.

Some survive, their minds compressed by the jungle, until they were diamond hard, focused on survival. They now live in dereliction, scavenging from the jungle, the reasons for this adventure now eluding them but yet they are unable to abandon the Sky Raft.

All they know is that they are not dead. For them, reason enough to push on.

First picture: A screen capture from this video:

This went off the rails at some point. But I enjoyed it so I kept on writing. I may f been thinking of Apocalypse Now.

A person who enjoys writing short story things, poetry and other random things that come into my head.
View all posts by skyraftwanderer →
This entry was posted in Fragments, Poems and tagged Jungle, Moon, Moths, Night, Poetry, Prose, Skeletons, Sky Raft. Bookmark the permalink.